Version 3.0 at the Neil Simon Theatre

After a brief summer tour, The Scarlet Pimpernel returned to New York, opening at the Neil Simon Theatre in September, 1999. Shortly after the opening, a joint Jekyll and Hyde/Scarlet Pimpernel net-together was held at The Broadway Grille. The new leads of SP, Ron Bohmer, Carolee Carmello and Marc Kudisch, were kind enough to attend. Kelly invented a quiz about the show, which proved to be lots of fun. Marc Kudisch even tried it out!

In a visit backstage on December 29, 1999, Kelly was encouraged to hold Ron's severed head. Shortly before that, on November 21, 1999, we celebrated the second anniversary of The Scarlet Pimpernel at Barrymore's Restaurant. Ron Bohmer, Marc Kudisch, Harvey Evans, Jim Hindman and Kirk McDonald spent some time with us that day.

And Marc, well, I'm not exactly sure what Marc is doing here!

It was a bittersweet celebration, however. The Scarlet Pimpernel closed on Broadway on January 2, 2000.

Carolee on the day of the closing

Anne T. organized a lunch at Barrymore's on closing day

Marc and Kelly at the Neil Simon 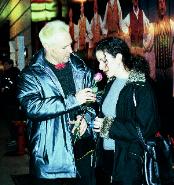 And so, Percy goes on the road!