An abbreviated Online Version of my Scrapbook

At the recent close of the Scarlet Pimpernel national tour, I felt it was time to put together a scrapbook of my memories of this experience, something I'd been thinking about for a long time. Anyone who knows me knows that I love to document occasions with photographs. If you've seen any of this website at all, you will not be surprised! I love pictures. Whenever I look at a website for the first time, the first thing I look for is the photo gallery. I'm still inexperienced at this website business and the only thing I can imagine doing with it is putting pictures on it. So, it's appropriate that I try to capture a bit of the scrapbook and put it on the web for all to see. I can't put every picture here. The book is quite extensive. I do claim ownership of most of these pictures (those which are not mine are credited) and let me just ask here, if you like them and would like to use them on your own website, please ask permission first. Yes, most of these can be seen on Kelly's website but I think there's room for another look at them. Now, here we go!

Here is the text of the note in the beginning of the book:

We first saw The Scarlet Pimpernel on February 18, 1998. Kelly had already started her personal website, which quickly became a Scarlet Pimpernel site. Kelly joined The League right after seeing the show and I followed soon after in April, 1998. The first function we attended after hearing about it in League email was the appearance of Douglas Sills and Christine Andreas at Macy's on April 16, 1998.

The first big gathering of League members took place the weekend of June 12, 13 and 14, 1998. It rained all weekend. No, it was more like a monsoon! Nothing could dampen our spirits, however! There was a Friday night meeting of League members at the Marriott Marquis Hotel, a talkback after the show on Saturday (which we were lucky to attend after I left the tickets home and had to go back to retrieve them!), an auction at the Marriott on Sunday morning and a lunch at Barrymore's Restaurant Sunday afternoon. And we were off! 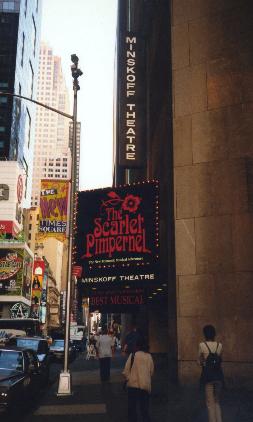 Douglas at the Macy's appearance

After the Macy's appearance, we went back to the Minskoff to take some pictures of the posters there (to finish the roll of film) and ran into Douglas in the tunnel. Consequently, here is the first picture of Kelly and Douglas.

As I mentioned earlier, it rained this whole weekend. It was the kind of rain that made you start looking for Noah and the ark! The weekend started with an informal gathering at the Marriott Marquis Hotel Friday evening. This was an opportunity to put faces with the names of the people we'd been chatting with online. It was also the first time Peter showed us the fledgling official Scarlet Pimpernel website, even before it was online and ready for use. click here for the official site.

On Saturday, we set out to see the matinee of the show, which included a talkback with the cast after the show. My husband, Bill, Kelly and I were on the express LIRR train to NY when Kelly casually asked me if I had the tickets. They thought I was kidding when I looked shocked. Nope. No joke. I had forgotten the tickets! What followed would have made a good sitcom. We jumped off the train at the next (and only) LI stop before the city (good thing Kelly asked me before this stop and not once we had gone into Queens), took a taxi back to Babylon station, drove home, picked up said tickets, and drove like mad (well, Bill did) into Manhattan. It was frantic but, believe it or not, we were in our seats with ten minutes to spare. Ever since then, Kelly will ask me to show her the tickets before we leave the house when we are going to a show.

Sunday began with an auction at the Marriott Marquis Hotel. Ok, enough has been said and written about this so I won't elaborate! Here is Douglas at the auction wearing the auctioned jacket. I wasn't in a position to bid on anything but did buy the show used props of Marguerite's note (autographed by Christine Andreas) and the note Percy tacks onto the guillotine (autographed by Douglas Sills and Terrence Mann). Peter prevailed and bought himself the guillotine blade.

We continued to Barrymore's after this for the League lunch. Kelly and I sat with Amy Gargan and her Mom and sister, Sandy Rosenberg and T. Eric Hart (aka Eric Bennyhoff). Our tablemates and Sandy, Eric, Douglas and Amy. This weekend was organized by Theatre Patrons Care and here are the hostesses, Lynne and Jen with flowers given to them by Douglas at the lunch. Back at the Minskoff, we gathered for the first league group shot.

In July, 1998, NYC hosted the Goodwill Games. The cast of the Scarlet Pimpernel participated in two free concerts held in Battery Park City. Lauri Landry, Eric Bennyhoff (T. Eric Hart) and George Dvorsky (u/s Marguerite, Chauvelin and Percy - SP1) performed songs from the show at one free concert, attended by fans. Here are Anna DelGenio, Kelly and me at that show:

Here are George and Eric.

Linda Eder performed with Douglas, Rob Evan, Carl Anderson and Chuck Wagner in another free concert on an incredibly hot and humid evening. Even the rain late in the show didn't break the heat. The heat, however, didn't stop Douglas from making Linda laugh during the show.

Kelly and I collected autographs from cast members and I sewed this friendship pillow, which was auctioned by Lynne (Kirby Hall) on the TPC website in September, 1998. It sold for an astonishing $1,050. Here is a picture of Douglas and me with the pillow at the Broadway Flea Market, September, 1998.

On October 1, 1998, The Scarlet Pimpernel closed in order to rehearse a new version of the show, which would open October 10, 1998. In this picture, Douglas finds a novel way to hold his flowers and sign autographs at the same time. This is my favorite picture of Christine Andreas.

And so we move onto Scarlet Pimpernel Version 2.0.